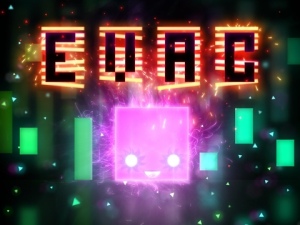 Evac HD by Hexage is a great tribute to simpler arcade games of a past era — notably Pac-Man and its offshoots — but the game offers a completely new way to complete the main objective of collecting dots to exit a level. Instead of just avoiding enemies and waiting for the one powerup allowing you to eat them, as is the case in Pack-Man, Evac allows you to crush your enemies by manuevering blocks around them. The game also adds a wide range of powerups to have in your arsenal like being able to shoot lightning bolts to freeze the enemy squares or an aura forcefield that destroys them fully.

The game has a lot of personality and great animation with various blocks having their own distinct look and faces with features like eyes and a mouth. There really isn’t much of a story however outside a pink block, with a face, trying to escape his environment designed to keep him locked in. I also want to add how wonderful the sound effects and music are. It really is like a trance type of electro-beat that plays in the backround and as you gain rogress, you really feel the rush of the music with you. The beat also changes in mid-level overtime as you gain progress and higher multipliers.

The pink square in your disposal is controlled by a virtual dpad that never really gets in the way of the action and is implemented pretty well. At times moving perfectly in a specific direction may cause problems, but only in wide open spaces. You can move Cratos as well as certain yellow blocks to manuever through each level and find exit points after collecting all the dots. Other blocks are immobile, however, and you have three chances or lives to avoid the red enemy-blocks. As you keep gathering point multipliers are awarded as long as the pink square doesn’t get hit. There are also various platforms that need to be activated in order to open an entry point or door to a new section of the level and this is done by doing puzzles such as moving a block onto a switch.

You are a pink square block trying to find a way to escape the game-world environment constraining him and avoid red enemy-squares in the process. In the first few tutorial levels a yellow and immobile block named Cratos teches the mechanics of the game. He can also be moved around in mid level. A purple arch-rival named Shadowbox will also make an appearance from time to time during levels to tell you how pointless trying to escape is and how he really is in control.

Some of the game’s levels include puzzles like manuevering around spikes or dead ends with a ghost powerup for example. Or going through a row of spikes that pop up at different intervals. There are 24 levels in total and there is a nice variety to the level design and challenges presented. 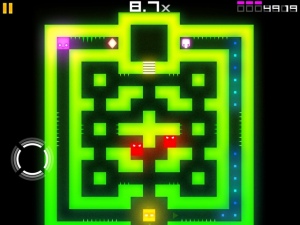 One thing that dissapoints me personally is the lack of a recent update for the iPad’s latest OS’s multi-tasking ability although I heard the other iDevice version supports it. If you exit the game in the middle of a level to do something else on your iPad you will have to restart the whole game once reopened. Another gripe is I would love the view or camera angle to stay put without scrolling and screen orientation to be consistent without black bars or emptyness on edges. There is no reason, on the iPad’s largeer screen, that the entire level shouldn’t be visible without scrolling. On the other hand it could cause obstruction of view because of controls and hands using the virtual dpad but that could easily be corrected by having a part of the screen not in-level specifically designated for the dpad.

Evac HD features a great deal of fun for puzzle and retro fans alike. There is a wide selection of obstaclea and puzzles to overcome and enoigh levels to last you a while. The price is a huge selling point in my book however as it is only $.99 — both for standard and iPas HD versions — and that is a steal for such an innovative take on an old-favorite formula. There really is no excuse to not at least give the title a try. With so many games beingnvlones of each other these days or ripoffs rather than new takeson established formulas, I appreciate the efforts done in Evac HD and recommend it quite highly.